Stable isotopic labelling is the most reliable and accurate method for quantitative proteomics and metabolomics. Proteomics studies on uniformly 15N-labelled rats have been previously reported using 15N-labelled algae as protein source for Stable Isotope Metabolic Labelling in Mammals (SILAM).[1]

- SILAM Mouse Diets (diets vor other model organisms such as fly and worm are available on request),

Silantes has developed a 15N-diet in cooperation with the group of Professor Chris Turck, Max-Planck-Institute of Psychiatry as a kit containing a 15N-labelled “heavy” diet (B) and unlabelled “light” diet (A).[2] It is an artificial feed using Harlan components and a hydrolysate of the bacteria Ralstonia eutropha as 15N-protein source. Feeding experiments showed that the mice accepted bacterial-based protein better than algae-based protein.

After the metabolic labelling (feeding) of the mice according to the scheme in figure 2 or figure 3, the mice are sacrificed. Differences in the protein patterns are determined in analogy to the established SILAC approach in cell culture (see literature for Silantes in vitro SILAC).

A variation of the in-vivo SILAM-approach is the “spike-in” approach.

Figure 2 shows the SILAM spike-in workflow: Differences in protein patterns of unlabelled case tissue with respect to unlabelled control tissue can be quantified by “spiking-in” a 15N-labelled reference tissue.

This 15N reference tissue can be obtained from Silantes directly, as frozen material or lyophilized.

Short outline of the procedure:

The isotopically labelled “heavy” reference tissue is mixed with the unlabelled “light” case and control tissue, respectively. The proteomes of the case/reference-mix and control/reference-mix are isolated, digested and subjected to LC-MS. Therefore, the two peptide amount ratios can be determined in analogy to the in-vivo SILAC-workflow to determine the case/control ratio (see Silantes in-vivo SILAC literature).

In addition to spiking-in the 15N-tissue as reference material for relative protein quantification by mass spectrometry, the SILAM approach is used in further applications such as

If the goal is to detect and relatively quantify a large number of metabolites in an untargeted manner, lower organisms can be fed or mammalian cells grown with a diet or media, respectively where 12C is replaced with the stable 13C isotope. The generated tissue or cellular material can then be used as isotope-labelled internal standard reference. This approach has been successfully established for microorganisms and was subsequently extended to plants and small animals.

Silantes has developed a diet to 13C-label mice with the aim of producing isotope-labelled material as reference for metabolomics studies.

We have developed 2 diets for metabolic 13C-labelling of mice:

We have shown that amino acids in human plasma samples can be relatively quantified using reference material from mice fed for 14 days with the partially 13C-labelled diet. 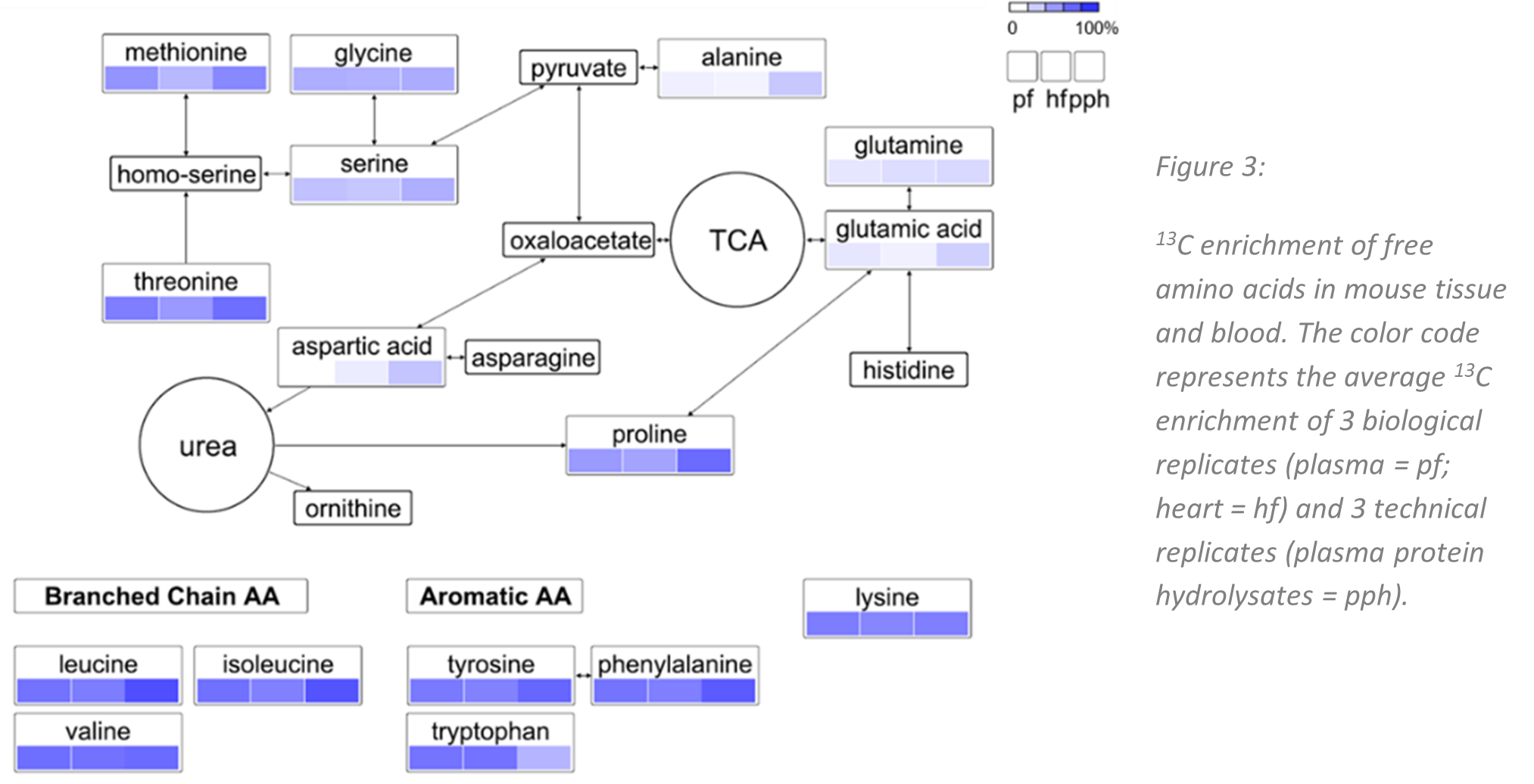 For the relative quantification of amino acids in human plasma samples, the partially 13C-labelled mouse reference material turned out to be a very valuable source. Since mice share many metabolic pathways with humans it is conceivable that our approach can be further extended to other small molecules of interest in human metabolomics research.

In addition, mouse 13C-labelled blood and tissue material can serve as valuable reference for metabolomics studies of mouse models, to verify biomarker candidates and aid in their identification